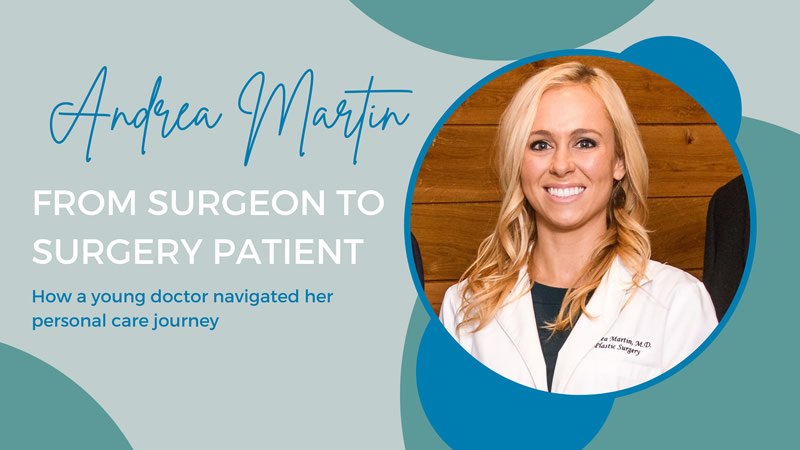 From Surgeon to Surgery Patient

How did a young, active, and healthy plastic surgeon have unexplained total loss of knee cartilage?

Andrea Martin's story is a perplexing one. She had no major injuries or a history of strenuous activity. She understood how to live a healthy lifestyle as a doctor herself. Yet she found herself in need of a double cartilage replacement shortly after graduating from medical school.

"My boyfriend worked in orthopaedics and knew something sounded off. When I would go up the stairs, my knees popped like Rice Krispies," Andrea recounted. 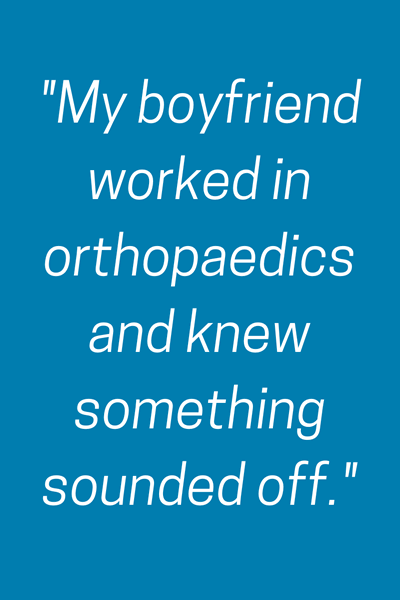 Martin's boyfriend, Dr. Josh Berber, worked with Dr. Pat Smith during his residency at Mizzou in 2019. He immediately referred her to see Dr. Smith. If there were a solution to her complex knee predicament, Dr. Smith would surely have the answer.

At the initial appointment, Dr. Smith ordered x-rays and an MRI to assess the current condition of her knees. Surprisingly, the MRI revealed significant loss of cartilage from her patella. Subsequently, arthroscopic surgery was done on both knees confirming "bare bone" patellar cartilage loss to the point of needing a double patella transplant.

Surgery
With a diagnosis, the next steps became locating a donor and scheduling the surgery. Dr. Smith urged Andrea to opt for the more conservative approach to performing the surgeries one at a time to allow for more mobility during recovery. It took some convincing, but Andrea persuaded Dr. Smith to do a bilateral patellar osteochondral allograft instead. Bilateral patellar osteochondral allograft is the technical way of saying he would perform the surgery on both knees simultaneously. This procedure shortened the recovery window but made her mobility extremely limited and more intense in the short term. 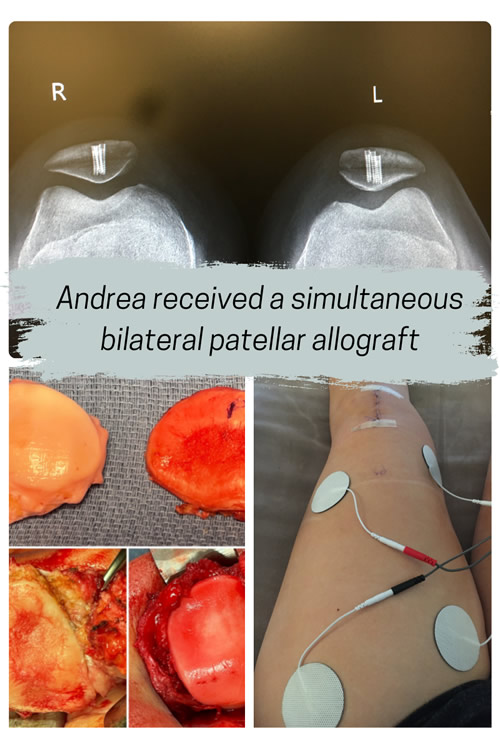 With Martin in the swing of her plastic surgery career, she was eager to return to work with her patients. She was committed to returning to everyday life as quickly as possible, so she promised to be a good steward of her new knees, and with that decision, she scheduled the surgery for May 17, 2021.

"Andrea convinced me to perform the bilateral patellar allograft at the same time so that she could get back to her work and normal life a little more quickly," said Dr. Smith. "In addition to the stress of the surgical procedure itself to make sure optimal graft size and position was achieved, I will admit, since she's a plastic  surgeon, I also felt the pressure to ensure her scarring would be minimal. So, I worked hard to make her incisions as pretty as possible."

They laughed as Dr. Smith mentioned his extensive attention to detail when finishing her incisions.

As Martin posted on Instagram, "I have to thank Dr. Pat Smith @columbiaorthogroup for being willing to jump in both knees first and his meticulous incision closure."

Post-Op/Recovery
The real work began for Martin during post-op. Martin took to social media to chronicle her experience of being bedridden for six weeks. She explained her post-op journey to her followers with the Instagram caption: "I spent a month in a wheelchair, knees locked straight (except for 16 hours/day in a passive motion machine), and another six weeks in long leg braces (à la Forrest Gump, but somehow more awkward)." 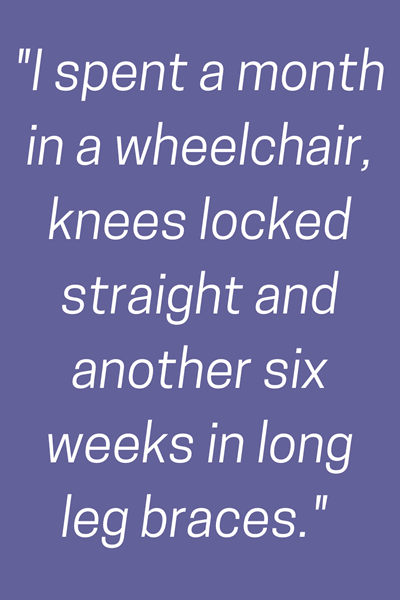 Martin's boyfriend laughed as he described how he would carry her "fireman style" into bathrooms, restaurants, and in/out of the car. Bathrooms and other small places proved particularly tricky to navigate. With her legs locked out, she struggled to find enough room to turn around and maneuver through small spaces.

Martin laughed, too, as she recalled getting stuck in the bathroom doorway while out to dinner one night. She had to flag a server to send help to her boyfriend. Nevertheless, she was determined to still enjoy her time out of the house and had a positive attitude about her post-op life.

An unexpected outlook using donor tissues
Martin recounted her gratitude for her tissue donor. Without the donated tissue, her ability to lead an active life looked slim.

"It was very humbling and eye-opening for many reasons," Martin recalled on the first anniversary of her surgery. "Most significantly because I am now the recipient of an organ/tissue, and I now have a donor to whom I am forever indebted."

"It was weird when you get the call that there's a donor match. On one hand, there was light at the end of the tunnel for this surgery. However, you can't help but feel guilty knowing these are donor tissues and someone had to be a match in age and sex for the surgery to work," said Martin. "It made it feel really personal." 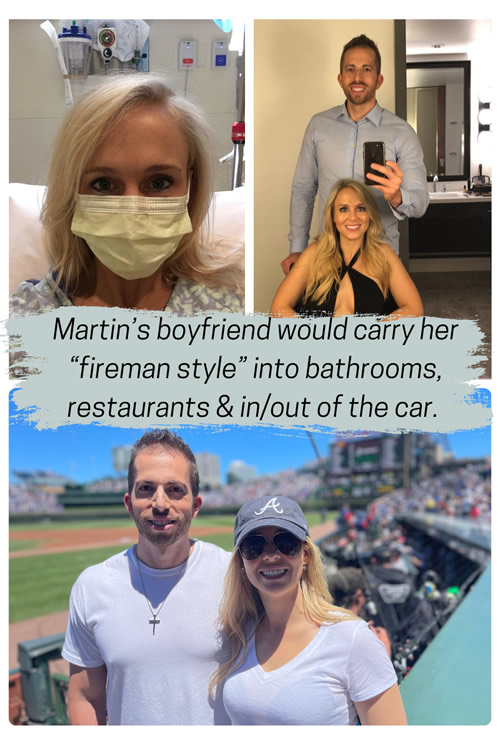 She had the opportunity to write to the family of her donor. Martin admitted she had an emotional moment recounting her gratitude. Having a medical degree and a background in reconstructive surgery, she understood the position of the family of a donor.

When the mother of her donor replied to Martin's letter to thank her for writing it, it was a powerful moment, and a profound part of the recovery process.

Switching sides: from being the patient back to being the doctor
Martin was back in the operating room (OR) working with her reconstruction patients (in her braces) in only six weeks! She laughed as she told her story of meeting patients in two full leg braces "waddling like Bambi," yet assuring them she is more steady with her hands than her knees.

She drives from Chicago to Columbia Orthopaedic Group (COG) because she loves the team.  When Martin arrived for her check-in, Dr. Smith inspected her knees as she sat in the exam room.

"We sure did. These are beautiful knees," Dr. Smith replied with a nod of reassurance.

She missed her active lifestyle and was eager to return to the gym. Martin was thrilled when Dr. Smith told her she could return to her typical activity level.

Of course, there were still a few restrictions. Dr. Smith was specific about avoiding leg extensions and going easy on the squats. ("Nothing below 90-degree bends.") These were small concessions compared to being carried around, fireman-style!

Life went back to normal, and she began attending athletic events, enjoying dinners with friends, and traveling to see her boyfriend.

Looking back at her past year, Martin remembers her experience with gratitude and relief to have the hard part behind her.