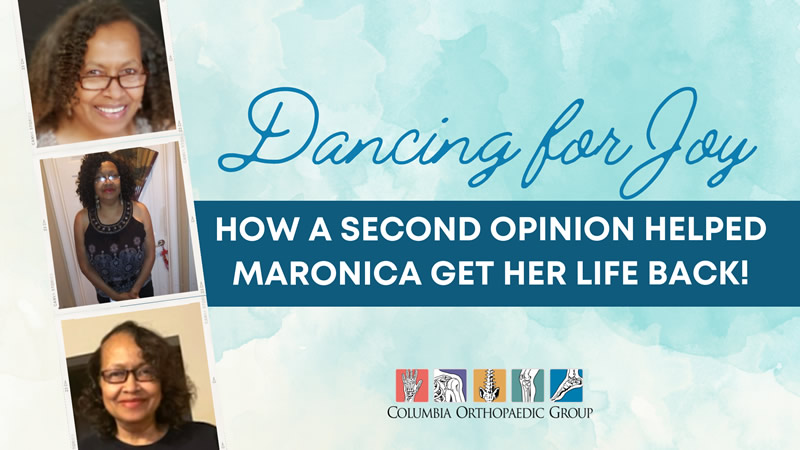 Dancing with Joy: How a Second Opinion Helped Maronica Get Her Life Back

She endured persistent back pain in 2021, despite undergoing surgery in 2017 to remedy her pain. Knowledge is power, so she poured over her detailed records in the patient portal. Amidst the medical jargon, she noticed something like a needle in a haystack. An x-ray report noting a loose screw.

Kitchen was an informed patient. She was aware that screws from surgery could come loose and travel throughout the body. This complication can cause health-related issues, so she addressed it with her surgeon. 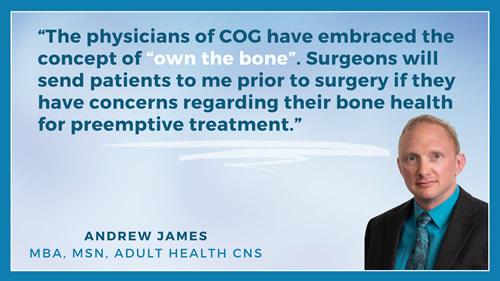 "I asked for an additional x-ray because I knew it was important to advocate for myself and my health," Kitchen shared. "But my surgeron didn't see a possible screw loose as an cause for concern." However, upon my further concern, he suggested several surgical options.

"I'm not normally the type of person to ask for a second opinion, but after a discussion with my daughter Mya I wanted to look further into getting additional x-rays."

"I mentioned my predicament to a friend," said Kitchen. "I told her my surgeon said an additional surgery wouldn't be worth opening me up again to find a possible loose screw."

Kitchen's friend had visited a local surgeon, Dr. Tyler Jenkins, at Columbia Orthopaedic Group (COG). The friend recommended that Kitchen see Dr. Jenkins after her own successful treatment, which provided significant relief from her neck pain.

After being unable to convince her former surgeon to perform another x-ray, Kitchen was pleasantly surprised when Dr. Jenkins asked if she would be okay with getting an MRI before her appointment with him.

"I was thrilled to do so," said Kitchen. "He also recommended a standing x-ray. I went into my first visit with a more accurate picture of what was going on and what my body needed." 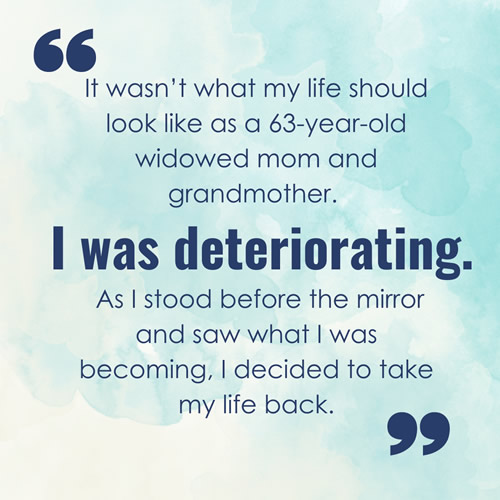 Her concerns were validated in her first meeting with Dr. Jenkins when he confirmed that she did need surgery. It was a relief to know she was heard and her pain was taken seriously, but there was one caveat. Dr. Jenkins advised that she would have to wait until her bones were strong enough before she could undergo the procedure.

Own the Bone: Taking a holistic approach to your pain…

"The physicians of COG have embraced the concept of "own the bone" which was put forth by the American Academy of Orthopaedics. To that end, surgeons will send patients to me prior to surgery if they have concerns regarding their bone health for preemptive treatment," said Andrew James.

"All patients are given information regarding calcium, vitamin D and other bone-related nutrients. Patients who have evidence of significant bone loss are placed on medications such as Tymlos or Forte that stimulate bone growth and have shown improved surgical outcomes."

"I was willing to do anything to feel better," said Kitchen as she recalled the nightly Forteo shots she would give herself before bed.

The intensity of her back pain had reached a point whereby it kept her from driving though she was only in her early sixties.

"To be told you will have to wear a brace for the rest of your life, is pretty crushing news". Because of the leg brace, I wasn't able to wear regular shoes. In a bit of a panic, I went out and purchased multiple pairs of extra wide shoes in just about every color. I converted my drivers license to a ID status and started preparing for my 'new normal'.

She used a tall cane, but she still had to hunch over to get around to support the height of her tall frame. Daily tasks like getting the mail, laundry, and taking out the trash were farmed out to her family members. The physical limitations affected her emotional wellbeing.

"It wasn't what my life should look like as a 63-year-old widowed mom and grandmother," said Kitchen. Looking back at that point in her life, she didn't realize how bad it was. 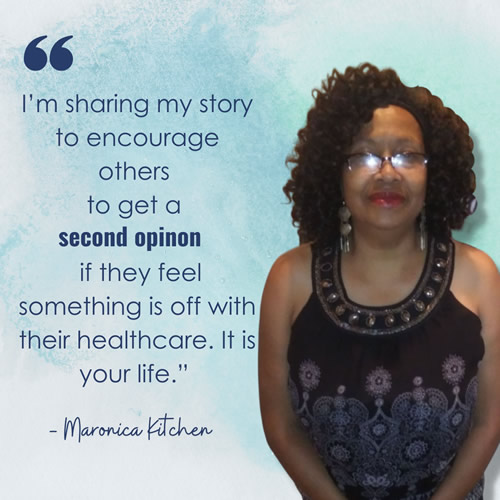 "I was deteriorating," she said. "As I stood before the mirror and saw what I was becoming, I decided to take my life back."

"I noticed the way he talked to his nurse, staff, and me," she said. "He complimented his staff as they explained all the forms to me. He was thorough, answering every question I had and making sure I understood and felt comfortable at every step."

"I trusted Dr. Jenkins and his team one hundred percent. I felt like the concerns I had were validated, that I was cared for, and I just felt so much love."

"My life has come back to me," Kitchen said.

Steps towards pain-free living: a revision surgery to end all surgeries…

After a revision surgery and physical therapy, she is quick to acknowledge that it was all worth it. I felt like a teenager again. Maronica joked with Dr. Jenkins that she felt like she could dance down the halls of COG, Dr. Jenkins replied, "just no roller coasters". She was a different person than the woman who first entered in 2021 hunched over her cane. The transformation wouldn't have been possible if she hadn't advocated for her health and sought a second opinion.

Being able to laugh is part of her daily life, and the restoration of her physical health helped boost her levity of spirit and emotional wellbeing.

"I'm sharing my story to encourage others to get a second opinion if they feel something is off with their healthcare. It is your life."

"You don't have to blindly go along with an opinion just because someone else's degree is higher than yours. I never felt this was the case with Dr. Jenkins. He explained things to me, leaving all decisions up to me. I knew that I had to do my part, but Dr. Jenkins knew what I needed to do to have a successful outcome."

"I trusted him and the care plan we created together," she said. "He's just a beautiful person."

"Ms. Kitchen had a complicated problem when she first presented. She had a previous lumbar surgery that had not healed correctly (pseudoarthrosis). It led to her prior screws loosening and destroying bone in her back. The issue was compounded by spinal stenosis and instability above and below her prior attempted fusion. Ultimately, I knew that our team could help Ms. Kitchen if we got her optimized and performed a revision surgery. I developed a unique-personalized operative plan and put it into action. I'm thrilled with the outcome, and it was great to see Ms. Kitchen dancing down the hallway. Moments like that make all hard work worth it!" said Dr. Jenkins.

Get to know Tyler Jenkins, MD.